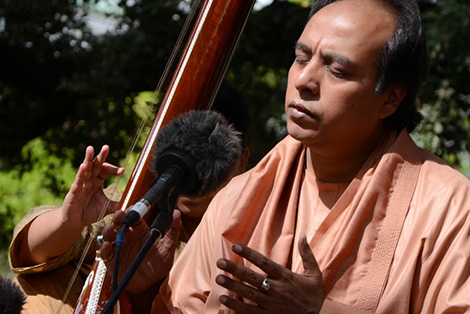 “I want to relax the spine of my listeners”, this has been Wasifuddin’s motto as representative of the most ancient dhrupad gharana. Since more than five hundred years, the Dagar gharana carries the legacy of DAGARVANI DHRUPAD which is until today the most ancient living classical music form of North India.

His mission aims at restoring interest and creating opportunities for people to appreciate classical music in its original form by communicating through a unique and innovative style very much his own. He is using words and analogies that everyone can relate to, cutting across geographical or linguistic boundaries. Having travelled extensively in India, Europe, UK, USA and Asia, he has a vibrant group of students and admirers.

His deep interest in philosophy enables him to relate his music to the very elements of music, sound, rhythm, ecstasy and peacefulness- all essential parts of life itself, nurturing mind and body.  He wishes through his music to arouse desire in his listeners to experience peace and enter into moments of meditative timelessness allowing them to find their centre and unravel the mysteries of the universe.  He has been collaborating amongst others with SPIC-MACAY for this purpose by giving concerts, lec-dems and intensive workshops. He has many talented students in India and abroad. Since 1995, he has toured regularly in Europe (France, Portugal, Hungary, Belgium, UK, Spain, Germany, Holland and Switzerland) and the United States (2000, 2001, 2003, 2005, 2007, 2008, and 2011) for concerts, talks, workshops and lecture-demonstrations. He has also been to Japan, Bangladesh, Pakistan and Thailand. He has a few “premiere” to his credit. In 1999, he recorded for Jecklin, Switzerland, a 5 CDs album of nine ragas sung at their appropriate time. In 2000, he sang at the United Nations Peace Summit of Religious and Spiritual Leaders in New York as a representative of ancient Indian sacred music. In 2000, he was invited by Philip Glass in New York for the World Festival of Sacred Music of H.H. the Dalai Lama that was co-curated by John Shaeffer of  WNYC Radio and archived on the Web. In 2003, performed in the reputed festival curated by Seppo Kimanen, the Kuhmo Chamber Music Festival, Finland. He has interviews on Indian TV recorded amongst others for DD Bharati, Lok Sabha and Rajya Sabha channels, and in France for Radio France International and Euradionantes. He has recorded CDs with renowned Indian and foreign labels: MUSIC TODAY (India, 1991) and for TRANCE (Canada, 1994) with his uncle, Ud. N. Zahiruddin Dagar; and in solo from 1995: Music Today (1995), JECKLIN (Switzerland, 1999) 5CDs album; RagaRecords (USA 2001); UNESCO (France, 2003); SENSE (UK, 2004, 2006), NAVRAS, UK (2009) and SPOTLIGHT (India, 2013 (CD with his own compositions of Baiju Bawra’s poems) Wasifuddin Dagar received many prestigious awards. In 2003 in Paris, France, the prestigious College de France conferred upon him the title of Dr. Honoris Causa for the excellence of his presentation on dhrupad. Rajasthan, the land of his ancestor Baba Behram Khan Dagar has recognised his services for the promotion of dhrupad by conferring upon him various awards including “Virasat” and the “Rajasthan Gaurav”.  In 2007, he was selected by the American satellite radio, WorldSpace for their “Worldspace Honours 2007”. In 2010, the Government of India conferred upon him the “Padma Shri”, the fourth highest civilian award. He has been nominated as General Council and Executive Board member of Sangeet Natak Akademi, Delhi and member of the expert committee for the Ministry of Culture, New Delhi. In 2010, he took out a DVD on tanpura. In 2011, he spent months as “fellow-in-residence” at the Institute of Advanced Studies (IEA)  in Nantes, attached to the University of Nantes, France pursuing his musical research on tanpura and microtones. He is featured extensively in “Dagars and Dhrupad: a divine legacy” by Humra Quraishi published by Niyogi Books in Delhi in 2015. Highlights of his most recent tours. In 2012: concerts in Japan at Todaiji and Budasena Ryosenji Temples in Nara, as part of the 60th Anniversary celebrations of the establishment of diplomatic relations between India and Japan. In 2013 prestigious concerts in France at Abbaye de Fontevraud and for “Festival des Trois Continents” in Nantes. In 2014 gave concerts in France and Italy, also performed in Morocco for the 20th Festival of Sacred Music of the World in the ancient city of Fes. In 2015, he was invited to Italy by the Danielou Foundation and to Arles (south of France) by the Festival-Les Suds. In June-July 2016 he performed in London and gave workshop and classes. Wasifuddin Dagar, 379 Asiad Village, New Delhi 110 049, INDIA Tel : +91 11 26492886  and Mobile +91 9811091786 E-mail : wasifdagar@hotmail.com Website : www.dagarvani.org