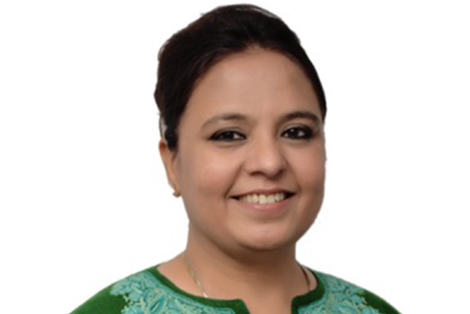 Qamar Dagar belongs to a family of renowned classical musicians of India, she is the daughter of Ustad N Faiyazuddin Dagar, one of the famous Dagar Brothers, but she was always drawn towards visual arts.

Hazrat Amir Abdullah Khan her spiritual and Calligraphy guide inspired her to follow her ambition.

After her graduation in sociology from University of Delhi that helped her to be sensitive to the aspects of other cultures, she travelled to Europe as an accompanying musician with her family. With Urdu spoken at home and Sanskrit, and Hindi/Braj-Bhasha (sung in the music compositions) she developed a fascination for the richness of those Indian languages. Her guru encouraged her to follow her heart and enhance her skill.

Since the early nineties she works in Hindi and Urdu scripts using alphabets/letters as art material giving visual interpretation to a chosen theme.

Her works are in private collections of people in India, US and Europe. She represented India at International Calligraphy Festival in Iran. She is Project participant of Russia based MVK Contemporary Museum of Calligraphy, Moscow (www.calligraphy.mvk.ru/en).

As founder Director of Qalamkaari Creative Calligraphy Trust (2011), Delhi, she has organized and curated International Calligraphy festivals in Delhi and Jaipur. She is committed to working towards making creative and traditional calligraphy known the world over as an important visual art.

She is also the Joint Secretary of Dhrupad Society and actively involved in the activities of Dagar Brothers Memorial Trust.

A diehard fan of all fine and visual arts, she tries to integrate the elements of music and visual art through this medium. Her own interpretation of words, themes, expressions and even poetry get reflected in her creations.