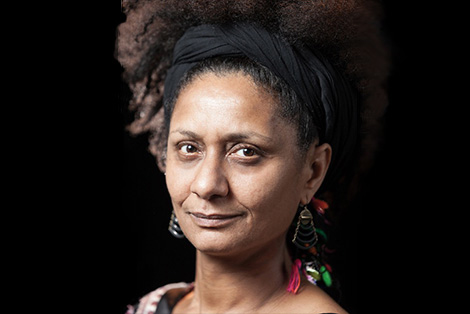 Nawal was born into a family of musicians from the Comoros Islands. Now living in France, she is recognised as being a key figure from her native islands: the ever-rising star of Comoros. A powerful singer/songwriter and multi-instrumentalist, Nawal plays guitar, gambusi (traditional lute, inherited from Yemen), and diverse percussions.

Nawal has the capacity to touch people’s hearts with her powerful voice and message. She sings in favour of all humans, for education and for union. She also conserves the philosophy of her great grandfather Al Maarouf, a grand Sufi master, who was inspired by the light of Islam founded on love, respect and peace.

A self-produced artist, Nawal has performed professionally for over 25 years, with concerts internationally in Europe, North America, Africa, the Indian Ocean and the Middle East.

In 2011 Nawal celebrated the release of her solo album “Embrace the Spirit”. In 2007 Nawal released her second album “Aman” (Peace of the Soul). Her first album “Kweli” (Truth) was released in 2001 (Mélodie).

Nawal has toured solo, in a trio, a quartet and with the “Femmes de la Lune”, a group of 6 women from Mayotte who sing and dance the tradition of the islands. Today she is celebrating the release of the documentary film, “Nawal et les Femmes de la Lune” which follows Nawal during her quest exploring the ancient feminine Sufi musical traditions of the Indian Ocean, and the creation of the group.