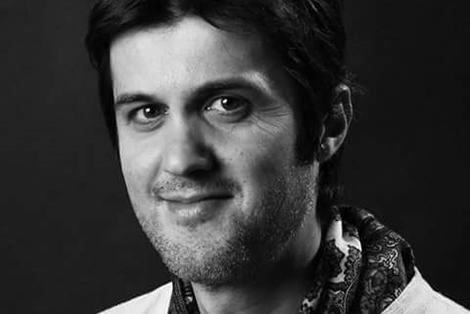 Enris Qinami was born in Tirana and lives in Paris since 2001.

With a diploma in guitar and teaching, he is also ethnomusicologist whit a passion for the traditions of the mystic arts of Islam. Being an enthusiastic researcher, he looks up ancient musical scores to play tunes that sometimes have not yet been played in the West.

Enris sings in Albanian a poetry inspired by Sufism with Mediterranean and Central Asia influences, accompanied by a plucked Albanian lute, the « Sharki ». This music with Persan, Ottoman and Arabic colors, obsolete for a long period of time, tells the story of both the love and the holy. It used to be sung in the Balkan bazaars.

The Albanian Sufi artist, called « Ashik », transmits the sacred words. The music he sings is called « Aheng » which means both music and « pleasure by music ». It is a link between the Sacred and the Profane, the nature of being and the one the one created, the birds, the flowers, the real and the imaginary.

The Sufi poetry that he sings is inspired by the remarkable Albanian language but also by the neighbouring languages. The musical language takes its roots in the Middle-Eastern tradition, the « Makam » or soul stations expressing a large scale of emotions and colors.